Our Most Recent Weddings

Once the COVID-19 pandemic began many of our couples were faced with the most difficult choice: giving up their dream wedding for a micro wedding or postponing until restrictions lightened. It’s been heartbreaking to see them face this uncertainty surrounding such an important day of their lives. Being on the other side of it now, it’s easy for Phil and me to say we should have eloped in hindsight and saved some money. But weddings are never truly about the couple, point blank they’re about the couple’s loved ones. Couples throw these big and expensive weddings with all of their friends and family because they care so much about them and can’t imagine causing them hurt by not including them on such an important day.

That’s what has been so beautiful inlight of the pandemic, seeing a couple’s family and friends come together to support and assist in any way possible with the couple’s special day. These micro weddings have such a uniquely magical place in my heart because they’re actually about the couple.

We’ve been really privileged to be able to capture some of these extraordinary days over the past few months and though I’ve been awful about posting blogs for them, these couples deserve all of the love possible! So today we’re looking back at some of the recent micro weddings we've shot due to the COVID-19 pandemic.

Gionna & Fred married April 3, 2020
I’ve loved Gionna and Fred’s love story since they first told us about it at their consultation over a year ago now. Gionna and Fred met in their high school chemistry class. They started dating later that school year on April 3, 2010. Fred was in the culinary program at the school and would often make Gionna baked goods and leave them in her locker. Every year as they would celebrate

their anniversary on April 3rd they’d have a pastry of some sort with a number candle in it coordinating with the year. This year with them planning to wed on their ten year anniversary they were understandably heartbroken when it seemed their wedding would be postponed. Gionna tried to find positivity in the circumstances, looking forward to their new date of April 3, 2021, coming up with the slogan 4-3-2-1 MARRIED! However, the ten year mark just felt too important to them. Though they will still be having their big wedding on April 3, 2021, they chose to hold an intimate celebration on their original date/ ten year anniversary. Surrounded by immediate family, with friends on Facetime, Gionna and Fred said “I do” under the pavilion at Wild Acres in Pittsfield, MA. Gionna’s mom surprised her that morning with the dress she had worn for her wedding. Gionna had no clue her mother had secretly had it altered for Gionna. With her mother also being a baker and originally supposed to be baking their wedding cake, she made cupcakes for the event. In the couple’s traditional fashion they topped them with a 1 and a 0 candle before feeding them to one another. Gionna’s dad toasted the couple before everyone gathered around for some sparkler photos complete with confetti cannons. We ended their special day by heading over to the high school where it all began for photos of Gionna and Fred on the front steps. Though there was not any music they had a very brief first dance; just as we were wrapping up the lights on the front steps automatically came on for the evening to end in some night shots. It was truly such a special day to witness.

Bethany & Jeremy married June 13, 2020
Bethany and Jeremy had planned a beautiful wedding for June 13, 2020 at a farm in upstate NY but in order to do their part in keeping their friends and family safe during the pandemic opted for a small ceremony in their front yard. One of their 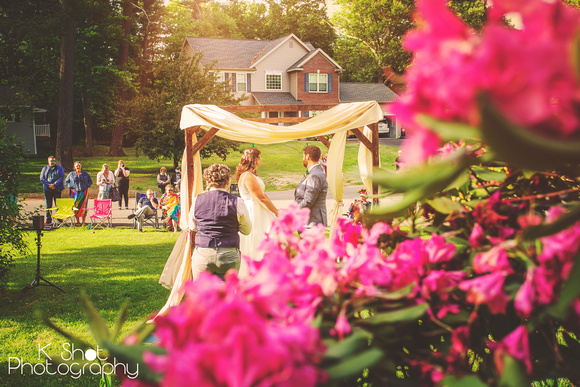 friends became an officiant just for the event while other friends also lent their talents, creating Bethany's bouquet as well as the boutonnieres for Jeremy and for Bethany's two sons. While another friend created a pie for the couple to enjoy later that night, an additional friend did Bethany's hair and makeup. Even another friend created the chuppah they stood under. Long before the pandemic began Bethany and Jeremy had chosen community as their wedding theme. The couple share a love of running and have found a family in the community they run with, hence their theme. Surrounded by their running community and friends, watching on from the street in front of their home and family watching through a laptop in front of them via Zoom the couple was able to tie the knot. Bethany's boys were the perfect ring bearers and also accompanied her down the aisle. Before the ceremony, Bethany & Jeremy shared an private moment during their first look in the backyard with the boys bashfully peaking, excited to see how beautiful their mother looked in her gown. Following the ceremony, the couple gave a toast to thank those who made the day not only possible but so special for them. We headed over to Thacher Park for some sunset photos before heading to downtown Albany, NY for the most amazing night shots. I swear someone knew they had just tied the knot and was celebrating for them, as we were fortunate enough to get some shots with fireworks by the Egg! It was a day that will not be soon forgotten and in a way was even more special than the event they had initially planned.